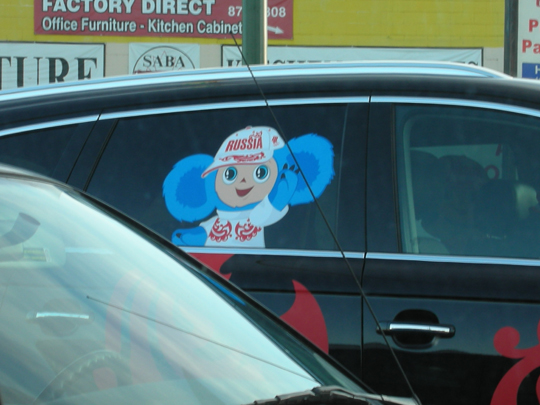 Yesterday when I was watching TV I found out that the Canadian Hockey team was practicing at Britannia community center. So my boyfriend and I hopped in my car and went there hoping that we could see some of the players. We were just in time and the players were about to get in their bus and we saw Luong, Iginla, Crosby and other players and took some pics. I was so happy when I waved to the players on the bus and some of the players waved back to me even though I couldn’t tell who the player was because window glass was all tinted. Anyway it was a fun.

And just after we start driving back from Britannia I clearly saw someone was waving to me! It was a ——- a blue Cheburashka on an Audi SUV, the same Cheburashka as the one I just got in the morning from my boyfriend. (I was chanting the name the night before. Not asking him to get it though.) What a coincident!

I told my boyfriend to chase the car so I could take a better pics. We were chasing, chasing and chasing the Black Audi in my little red Echo from Commercial drive to Great Northern way to Main St, like paparazzi! I didn’t know I would get more excited by spotting the Cheburashka than Crosby! 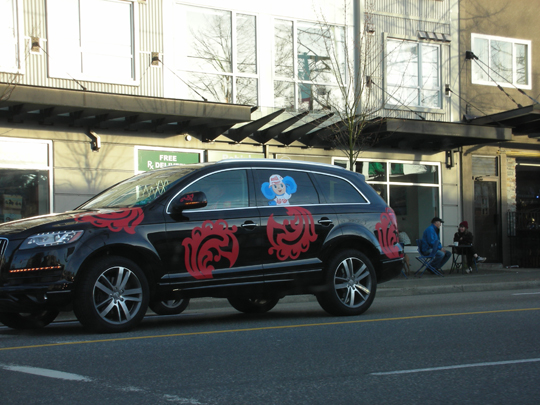 Blue Cheburashka on an Audi

See! Cheburashka was waving to me!

This is a demo store for testing purposes — no orders shall be fulfilled. Dismiss